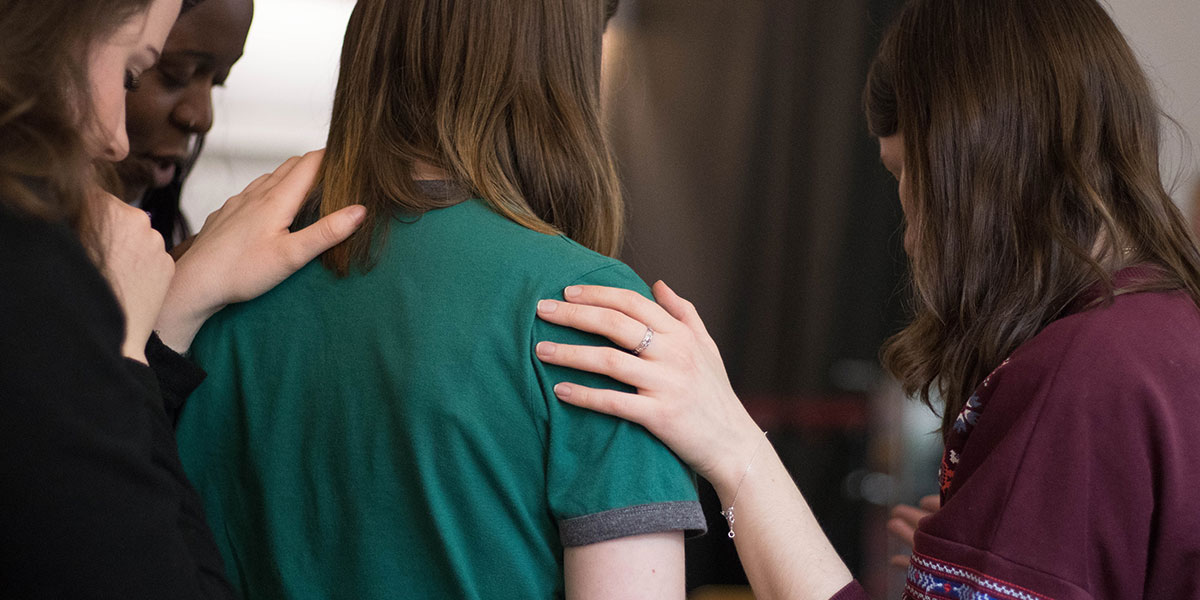 As Baptists we believe and practice the principle that ultimate authority for discerning God’s will for the church lies with the church membership. We gather four times a year at church meetings to talk, pray and discern what God is saying to us as a community.

The church meeting is also responsible for appointing individuals to oversee certain aspects of church life. We have called a minister and also have an elected leadership team

David Ford: David has been the minister at Bethesda since 2015. His sense of humour and relaxed leadership style are a good fit for our church family. His ministry building on our values. David is passionate about the local church as the hope for God’s kingdom in the world around us. As disciples to see the church grow and flourish and be all that God has called us to be. We appreciate his gifting as an excellent communicator, both in his preaching and pastorally. He is a good, compassionate listener.

He is married to the fabulous Jen and has 3 lovely children.

Eleanor Shergold: Eleanor is the glue that holds so many aspects of church life together. Along with managing the day-to-day admin of Bethesda, Eleanor also plays a significant role in the pastoral care of the church family. Eleanor works with the youth, leads the Kintsugi Hope group, is always happy to be invited for coffee, can lead, preach and given enough encouragement perform a solo on the kazoo.

Eleanor emigrated from overseas (Orkney) in the 1990s and made her home here in Wiltshire. She is married to the amazing Darren Shergold and has 2 wonderful children who are at university.

Alan Powning: There is little left to be said about Alan Powning. He has been part of the Bethesda fabric for over 50 years, on the leadership for most of that time and treasurer for more than 30 years. Alan preaches, leads a housegroup, turns up to every meeting and above all is a joy to know.

Alan brings a sense of hopeful pragmatism to the role of treasurer, knowing that investing in people and in mission will bring a fruitful harvest that sees the Kingdom come more fully. Alan is married to the equally wonderful and faithful Dorothy and have 2 grown up children and 8 grandchildren and 4 great-grandchildren.

Dave Rose: Dave has been on the leadership team at Bethesda for over 30 years, which considering he has been at Bethesda for only 31 years shows what an amazing and trustworthy man he is. Faithful, steady, generous and encouraging – Dave is far more at ease behind than scenes than up front. Dave leads Bethesda’s role in the soup run, is on the pastoral care team and has the best informal taxi service in Trowbridge – though he is quite happy to hand this business on to others! Dave is truly one of those servant leaders every church needs.

Dave is married to the lovely Jacqui and they have 2 children and 4 grandchildren and a Markland.

Debbie Youngs: Debbie is one of the newer members of the leadership team having been co-opted (coerced?) onto the team during the pandemic. Debbie’s gifts have been recognised by others for years – helping Debbie to realise them has been the challenge. Humble but direct, generous but wise, Debbie brings a level of decisiveness and challenge to the team that helps us stay very much on course.

Debbie heads up the hospitality at Bethesda, from Sunday morning refreshments to whole church meals for 100 people plus. This is an essential part of Bethesda life which helps us reflect the welcoming love of God we all know. Debbie is as unflappable as she is generous. Alongside this Debbie has worked with the youth and balances her church responsibilities with her role as governor at a local high school.

Nigel Harris: Nigel has been brought onto the team in the last year – having served several years previously. With an eye for detail and a brilliant habit of asking the awkward and challenging question, Nigel brings a whole different dynamic to the leadership team. His passion for reaching out to the community and embracing technology helps push us to ask those questions and seek God for answers. Nigel is also brilliantly practical and helps drive much of the conversation around fabric and maintenance.

Nigel also works closely with our links in Uganda and has visited many times – helping us to follow up our giving with prayer so that these links encourage us as much as our giving encourages our brothers and sisters in Uganda.

Gareth Hopkins: Gareth is the new kid on the block having come on to the team last year. He has been an integral part of Bethesda for many years working with the soup run, the shoe box appeal and much to everyone else’s delight –health and safety.

Despite being a Leicester City fan Gareth brings a level of optimism and encouragement to the role which impacts on us all – especially having worked through the last 18 months of the pandemic. He continues to take on all things health and safety as well as some fabric responsibility. He is married to the awesome Karen and together they have had several adventures such as climbing Mt Everest and camping in Dorset.

Our Motto:
‘A Church without Walls’

"I have come that they may have life and life in all its fullness"
John 10:10
Bethesda Baptist Church. Gloucester Road, Trowbridge, Wiltshire, BA14 0AA
01225 712299
office@bethesdabaptistchurch.co.uk
© Copyright 2022 Bethesda Baptist Church. All right reserved. Site by APWD.
Terms Of UsePrivacy Statement
We use cookies on our website to give you the most relevant experience by remembering your preferences and repeat visits. By clicking “Accept All”, you consent to the use of ALL the cookies. However, you may visit "Cookie Settings" to provide a controlled consent.
Cookie SettingsAccept All
Manage consent

This website uses cookies to improve your experience while you navigate through the website. Out of these, the cookies that are categorized as necessary are stored on your browser as they are essential for the working of basic functionalities of the website. We also use third-party cookies that help us analyze and understand how you use this website. These cookies will be stored in your browser only with your consent. You also have the option to opt-out of these cookies. But opting out of some of these cookies may affect your browsing experience.
Necessary Always Enabled
Necessary cookies are absolutely essential for the website to function properly. These cookies ensure basic functionalities and security features of the website, anonymously.
Functional
Functional cookies help to perform certain functionalities like sharing the content of the website on social media platforms, collect feedbacks, and other third-party features.
Performance
Performance cookies are used to understand and analyze the key performance indexes of the website which helps in delivering a better user experience for the visitors.
Analytics
Analytical cookies are used to understand how visitors interact with the website. These cookies help provide information on metrics the number of visitors, bounce rate, traffic source, etc.
Advertisement
Advertisement cookies are used to provide visitors with relevant ads and marketing campaigns. These cookies track visitors across websites and collect information to provide customized ads.
Others
Other uncategorized cookies are those that are being analyzed and have not been classified into a category as yet.
SAVE & ACCEPT